REVIEW: Summer With A Star by Merry Farmer 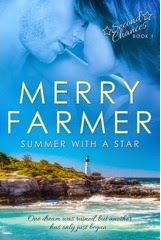 Awe... I loved this sweet book so much. It was exactly what I needed.
A beautiful love story that I can curl up in and fall in love right along with them.
I have a weakness for Hollywood romance type books and this one would make an awesome movie.
Spencer is a movie star trying to escape the chaos of being chased by fans and paparazzi so he rents out a house On the beach for the summer.
Enter Tasha, she has been saving up since she was ten years old to rent this beautiful house for the summer. It has been her dream her whole life. She shows up and instead of a house to herself she finds Hollywood heart throb ...and the fun begins.
Both characters were honest and kind and really wonder people you rooted for. Their love story was fun and relatively drama free. Their Happily ever after was a breath of fresh air. Oh and the sexy... So hot! LOL
I'm excited to see Simon and Jenny will be getting a book as well. That would be a really fun read.
ARC via BAM 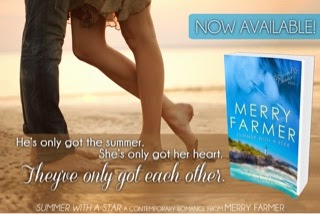 A story of expected endings, unexpected beginnings, and second chances: SUMMER WITH A STAR, a contemporary romance by Merry Farmer, is here!

All Tasha Pike has wanted for the past twenty years is to rent Sand Dollar Point for a summer. The grand Victorian on the beach of Summerbury, Maine was the object of her childhood fantasy and her standard of romance—and it was finally happening.

Her dream summer is ruined, however, when she arrives in Summerbury to find that Hollywood superstar Spencer Ellis has muscled his way into the house instead. His offer that they share Sand Dollar Point is not only infuriating—it’s insulting.

He’s a celebrity—and one she’s determined to hate.

Spencer’s summer in Maine was supposed to help him get his head screwed on straight. One look at Tasha, however, made that impossible. She’s beautiful. She’s angry. She doesn’t care who he is. She doesn’t care about his fame. In fact, she doesn’t even like him.

SUMMER WITH A STAR is the first book in Merry Farmer’s “Second Chances” contemporary romance series. It is astandalone novel.

Get your copy on exclusively on Amazon (and FREE with Kindle Unlimited!):  http://smarturl.it/SWAS-Amazon