First in the new Silver Valley series from the New York Times bestselling author of the Reapers Motorcycle Club Novels.

Fourteen months. For fourteen months, Puck Redhouse sat in a cell and kept his mouth shut, protecting the Silver Bastards MC from their enemies. Then he was free and it was time for his reward--full membership in the club, along with a party to celebrate. That's when he saw Becca Jones for the first time and set everything in motion. Before the night ended he'd violated his parole and stolen her away from everything she knew.

Five years. It was five years ago that Puck destroyed Becca and saved her all in one night. She's been terrified of him ever since, but she's even more terrified of the monsters he still protects her from... But Becca refuses to let fear control her. She's living her life and moving forward, until she gets a phone call from the past she can't ignore. She has to go back, and there's only one man she can trust to go with her--the ex-con biker who rescued her once before.

Puck will help her again, but this time it'll be on his terms. No more lies, no more tears, and no more holding back what he really wants...

Ignoring him, I settled back on my stool and surveyed the room. We sat in Becca’s section, and what I saw wasn’t making me happy. I knew she was a good waitress, but she’d just started here and it showed. Not only had she fucked up several orders, she didn’t quite seem to get the rhythm of the bar. That wasn’t my problem, though.

My problem was that despite these fuckups, nobody seemed to mind. I had a nasty suspicion this was due to her perky tits, friendly smile, and tight little ass that seriously just needed a bite taken right out of it.

She really, really needed to get a new job—every man in the place wanted her. Including me. Especially me. I hated them. All of them. I shifted uncomfortably, because just like every time I shared a room with her, my pants had gotten tight.

Torture. Becca was just so fucking fine on every level, and not just her looks. There was something about the way she carried herself . . . I couldn’t put my finger on it. Like she was dancing through life to some song nobody else could hear. Never met another woman like her—she wasn’t just sexy, she was a survivor and I admired that.

She’d grown up so much since the first time I’d met her. Bigger boobs, a nice fullness to her ass that was nowhere close to fat but would be perfect to hold tight while I fucked her. Her lips had plumped, too, and over the years she’d gained a sparkle in her eyes that turned her from pretty to 100 percent spectacular.

Not to mention how she’d tasted.

Nearly blew in my pants when I’d taken that mouth. Just the memory got me hard. Make that harder. Fucking basket case.

When I’d pulled up to find her sitting outside with Collins, a thousand murder scenarios ran through my mind. And yeah, I know I covered that already, but if anything ever deserved empha- sis, this was it. Collins needed to die. I didn’t care how nice he was. After that I’d throw Becca on the back of my bike and make a run for the hills . . .

Okay, so there were a few problems with the plan, the top one being she hated me. Or she should—I’d certainly given her cause. Boonie nudged me.

“Did I mention you’re pathetic? You want her, take her. Other- wise let it go because you’re an embarrassment to all men in general and to the Silver Bastards in particular.” 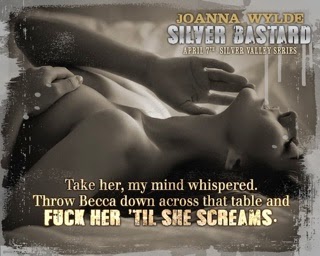 Joanna Wylde is a New York Times bestselling author and creator of the Reapers Motorcycle Club series. She currently lives in Idaho.